Spotlight & Giveaway - Rules are made to be Broken 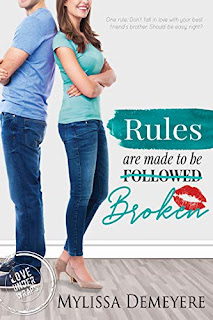 Rules are made to be Broken by Mylissa Demeyere
Book Blurb:
I’ve loved Will Henderson from the first day I laid eyes on him. But I made a solemn promise that same day. I would never, ever date Will Henderson.
For almost a decade, Charlotte Dubois has loved Will Henderson from afar, squelching her heart's silent yearnings. But no way could she date her best friend Kelsey’s brother. Their whole friendship is based on one rule: No friend of Kelsey can ever date Will. Instead, Charlotte has watched him date and break more hearts than should be legal.
Will Henderson never got over that stolen kiss he shared with Charlotte years ago—though he's tried valiantly to rid his system of his sister's best friend.
When circumstances bring the two into each other’s arms again, Will wants to convince Charlotte to break the rules and take a chance on him. But to do so, they will have to hide their relationship from the ones they love most. Can true love triumph, or will they both end up losing?

What Readers are saying:
This book will make you smile and laugh, maybe even shed a few tears. A sweet read that demands an all-nighter!— Taylor Dean, author of I’m With You and Chasing Fireflies.

A fun, yet heart-tugging romance that gave me all the feels.—Charissa Stastny, author of Between Hope and the Highway and the Rules out Romances Series.

Rules Are Made to be Broken by Mylissa Demeyere is a sweet romance with an even sweeter hero. It is sure to leave you feeling warm and fuzzy.— Robin Daniels, author of The Perfect Series.

Don’t you love it when days after you’ve finished a book the characters still visit your thoughts?

Charlotte and Will are a memorable pair and I enjoyed their story. The chemistry had me swooning and the dual POVs kept me entranced. Their growing emotions created a steady build of tension throughout the story.

It was easy to sympathize with Charlotte, although there were times I wanted to “shake some sense” into her. Out of love, of course. I rooted for her as she tried desperately to protect her heart and the relationship with her best friend. I understood why she didn’t want to jeopardize her friendship with Kels and tried desperately to avoid the attraction to Will. If only she hadn’t made that high school promise!

Now Will…I didn’t want to shake him. I adored him just the way he was. He had me swooning after that night on the bleachers when he comforted Charlotte. And even the nickname he gave her – Charles – made him even sweeter and more endearing.

Perhaps the dearest character of all was Charlotte’s grandmother, Mamie. She brought about a sense of nostalgia, making me think of my own grandmother. I love how Charlotte respected her, even with a bit of teasing.

Mylissa Demeyere makes her stories come to life with believable characters and life situations. Charlotte, Will & Kelsey’s relationships are dear, but their lack of communication kept me frustrated. And I mean frustrated in a good way. (I don’t want things to progress too easily in a story.) Ultimately, the story tugged at my heart and made it smile.

Source: I received a complimentary copy of this book.

“I let you out of my sight for one minute, and already you almost ruin a perfectly great tray of stuffed mushrooms, Charles?”
I didn’t need to turn around to know who had spoken. If the voice didn’t give him away, there was only one person in the world that would ignore using my given name and call me Charles, just to get a rise out of me. Will had an uncanny talent of sneaking up on me when I least expected it, delivering a line that sounded like melted chocolate with that husky voice of his. Most women swooned in his presence, especially when he worked his magic. I was not one of them. Well, at least not that I let him see. I’d known him too long and had trained myself to not give in to his charm. I’d been weak once before. Never again.
“You know me. I’m useless without you.” I laid on the sarcasm, and to add an extra push, I added, “William.”
It was our thing. Will riled me up by calling me Charles, I retaliated by calling him William. It was a childish habit we’d yet to outgrow.
Will’s face broke out into a wide grin, and I felt a flutter in my belly. No surprise there. He had that effect on me. He’d caught my attention that first day in high school, before I even met Kelsey. Who wouldn’t notice those ice-blue eyes and short, blond curls? It didn’t hurt that he had a broad chest with toned abs. I knew; I’d seen them up close many, many times. Be still my heart!
A female server passed with another tray, momentarily breaking up the intense stare-down between us. I took the opportunity to catch my breath and remind myself that Will was off limits. I would remain strong.
Will’s eyes followed the female staff member’s retreating form. She turned back and caught his eyes on her. I couldn’t blame her for turning back to take another look. The man was a nearly perfect specimen—absolute eye candy. He gave her his classic look, the one that made women want to have his babies, and her cheeks darkened. Instead of watching their exchange, I focused on Will. I’d seen him work his charm for almost a decade. I knew he was a player. So why did I let him get to me like this?
Without another word, I turned from the familiar scene. I was done having my heart crushed, as much as I hated to admit he still possessed the power to crush it.

About Mylissa:
Mylissa Demeyere was born in Belgium, and resides in the beautiful city of Ghent. She lives in a somewhat organized home with her four beautiful children and the love of her life. If she isn’t working, she’s writing, exercising, reading, or enjoying time with her kids, who are growing up way too fast. 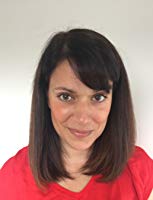 
Open only to those who can legally enter, receive and use an Amazon.com Gift Code. Winning Entry will be verified prior to prize being awarded. No purchase necessary. You must be 18 or older to enter or have your parent enter for you. The winner will be chosen by rafflecopter and announced here as well as emailed and will have 48 hours to respond or a new winner will be chosen. This giveaway is in no way associated with Facebook, Twitter, Rafflecopter or any other entity unless otherwise specified. The number of eligible entries received determines the odds of winning. Giveaway is organized by Mylissa Demeyere. VOID WHERE PROHIBITED BY LAW.
at 12/06/2019