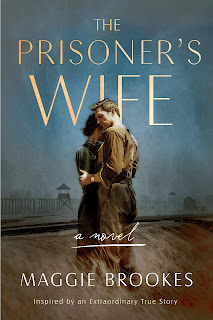 Inspired by the true story of a daring deception that plunges a courageous young woman deep into the horrors of a Nazi POW camp to be with the man she loves.


In the dead of night, a Czech farm girl and a British soldier travel through the countryside. Izabela and prisoner of war Bill have secretly married and are on the run, with Izzy dressed as a man. The young husband and wife evade capture for as long as possible—until they are cornered by Nazi soldiers with tracking dogs.

Izzy’s disguise works. The couple are assumed to be escaped Bristish soldiers and transported to a POW camp. However, their ordeal has just begun, as they face appalling living conditions and the constant fear of Izzy’s exposure. But in the midst of danger and deprivation comes hope, for the young couple are befriended by a small group of fellow prisoners. These men become their new family, willing to jeopardize their lives to save Izzy from being discovered and shot.

The Prisoner’s Wife tells of an incredible risk, and of how our deepest bonds are tested in desperate times. Bill and Izzy’s story is one of love and survival against the darkest odds.

Review
Everything was quiet and still, apart from the light crunch of our boots as we crept down the deserted street. The sliver of moon disappeared behind a cloud, and we slowed our pace, barely able to make out the way ahead. That was when we heard the dogs.
[Opening lines (prologue) of The Prisoner’s Wife]

I am often drawn to books with a WWII setting. There are so many stories and lessons to be learned from this time period. With each book I gain new understandings and inspirations from human experiences during dire and historical times. Especially when I learn, as is the case here, that the story is inspired by a true story.

Izzy is bold and courageous, hiding an impossible secret in an extremely dangerous situation. While imprisoned and disguised as a mute man, she risks being shot if discovered by the Germans. I connected with her quickly, sympathized with her, and admired her spirit. I don’t think I could’ve devised such a plan or stood through all she had to endure.

Bill is also easy to connect with. His protectiveness of Izzy and her secret is admirable, and I feared for him. The group of friends he bonds with gives the story so much depth and pierced my heart numerous times.

The Prisoner’s Wife is a hauntingly touching story, revealing the strength of the human spirit and the risks, rewards, and sacrifices of love and friendship. It gripped me from page one and made an indelible mark on my heart.

I received a complimentary copy of this book from the publisher.