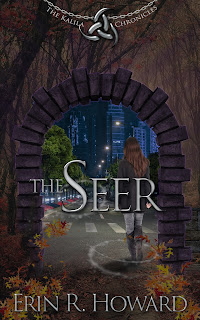 Kill the girl before her eyes are opened.

For thousands of years, his job has been to torment and kill seers: humans that have the gift of seeing the spiritual realm. So it was no surprise when his brother Matthias was once again sent to stop him and protect the girl.

Now the last of the seers’ bloodline hangs in the balance, as the estranged demon and angel brothers are forced to work together to save a girl’s life and escape to the sanctuary city of Bethesda. 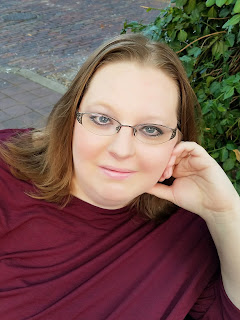 Erin R. Howard is a Developmental Editor, YA Urban Fantasy Author of The Kalila Chronicles, and has earned a Bachelor’s degree in Creative Writing/English from Southern New Hampshire University. When she’s not writing, Erin enjoys spending time with her family, fueling her craft addictions, and teaching writing workshops. Erin is a member of the American Christian Fiction Writers (ACFW) and the KenTen Writers Group. She resides in Western Kentucky with her husband and three children.

If I’ve learned anything these past few months, it’s that I’m still not a fan of change. It’s always been hard for me to transition from what I know, to the unknown, and then find a new normal. Let’s be honest. Stepping out of our comfort zone isn’t supposed to be easy. It’s supposed to challenge and stretch our faith. And as a result of stepping out, we hope that we will learn and grow.
I love messy characters, because life is messy, and it doesn’t always work out the way we expect. It’s full of changes and situations. The characters in my series, The Kalila Chronicles, are no different. Each character has unique challenges. For some, they didn’t ask for change, and for others, they are stepping out on their own.
Here’s a little bit more about The Seer. The first book in The Kalila Chronicles:
For thousands of years, Viktor has carried out his orders from Lucifer faithfully. But after a recent demotion in rank, he has grown weary of the bloodshed. His latest order is to kill Thea, a seventeen-year-old Seer before her gift manifests, and she can see into the spiritual realm. However, his estranged angel brother, Matthias, intervenes on his plans. Seeing this as his way out, Viktor proposes that in exchange for leaving Thea alive, Matthias must escort him to the sanctuary city of Bethesda. Although, getting through the portal isn’t as easy as Viktor thought, and now he has to work with Matthias to protect the very girl he was ordered to kill. 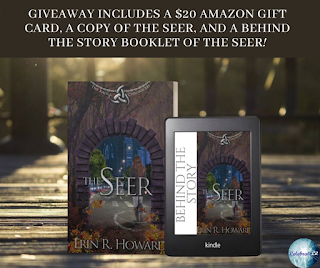 To celebrate her tour, Erin is giving away the grand prize package of a copy of The Seer, a Behind the Story Booklet of The Seer, and a $25 Amazon card!!
Be sure to comment on the blog stops for nine extra entries into the giveaway!
Click the link below to enter.
https://promosimple.com/ps/fe2f/the-seer-celebration-tour-giveaway
at Tuesday, July 21, 2020