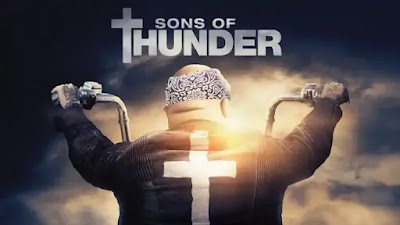 What an eye-opening, heart-touching, faith-filled Christian series! The Season 1 episodes of SONS OF THUNDER took me by surprise. Simon (Randal Reeder) is a tall, burly, combat veteran biker traveling the country as a new believer. His mission is to share God’s Word as he attempts to atone for past sins. Simon’s rough-n-tumble exterior and soft inner core are weaved together into a loveable, inspiring hero.

After watching the entire first season, I look forward to the upcoming spin-off season, SONS OF THUNDER: REDEMPTION 1/13/2022.

“Do you know Jesus?”

Simon asks in each episode.

Here's a brief spoiler-free review of each 30-minute (approx.) episode:

The series starts with a glimpse into Simon’s psyche as he leaves a dangerous motorcycle gang and follows God’s lead. This episode takes place in a Texas border town where Simon meets a rancher and his son in a broken relationship. And I love it when the title makes perfect sense.

The Blind Fighting the Blind

In this episode Simon comes upon a potential fight off the side of a road that results in an oil field job, a place to stay, and an invitation to church. The sermon states that God strengthens us through our suffering. I liked learning more about Simon’s exit from the motorcycle club, where Angie D (Don Swayze) President, and Ringo (Mavrick Von Haug) Sgt of Arms, give Simon an ultimatum between the Good Book and their club.

After Simon hits a deer while riding his bike, he’s offered a place to rest and tools to fix his motorcycle at a local game ranch. The lady owner is tough and savvy, but Simon sees a deep need in her while helping her locate poachers on her land. During flashbacks, we get potent insight into how Simon’s relationship with Jackie blossomed in a dodgy bar scene.

Wow. This episode begins with a jolt when Simon stops in a corrupt town to help a stranded motorist with evil intentions. This is an intense episode, with a cliff-hanging flashback.

A life-threatening situation on a chartered boat brings back memories for Simon of struggling to leave the bike club and hoping to reunite with Jackie. Even though I connected with the boat captain, the cheesy bickering couple on the boat made this my least favorite episode.

I knew Simon was on to something after he tells a repair shop owner his name is Sam after his bike breaks down in front of the store. In this episode’s flashback we discover more about Simon’s involvement with the bike club. Ending this episode at a pivotal point with a to be continued… is just mean! And genius.

In the season finale the emotions are high. The slimy shop owner had my blood boiling. There are some compelling characters in this episode, and Simon had me rooting for him when his past caught up.